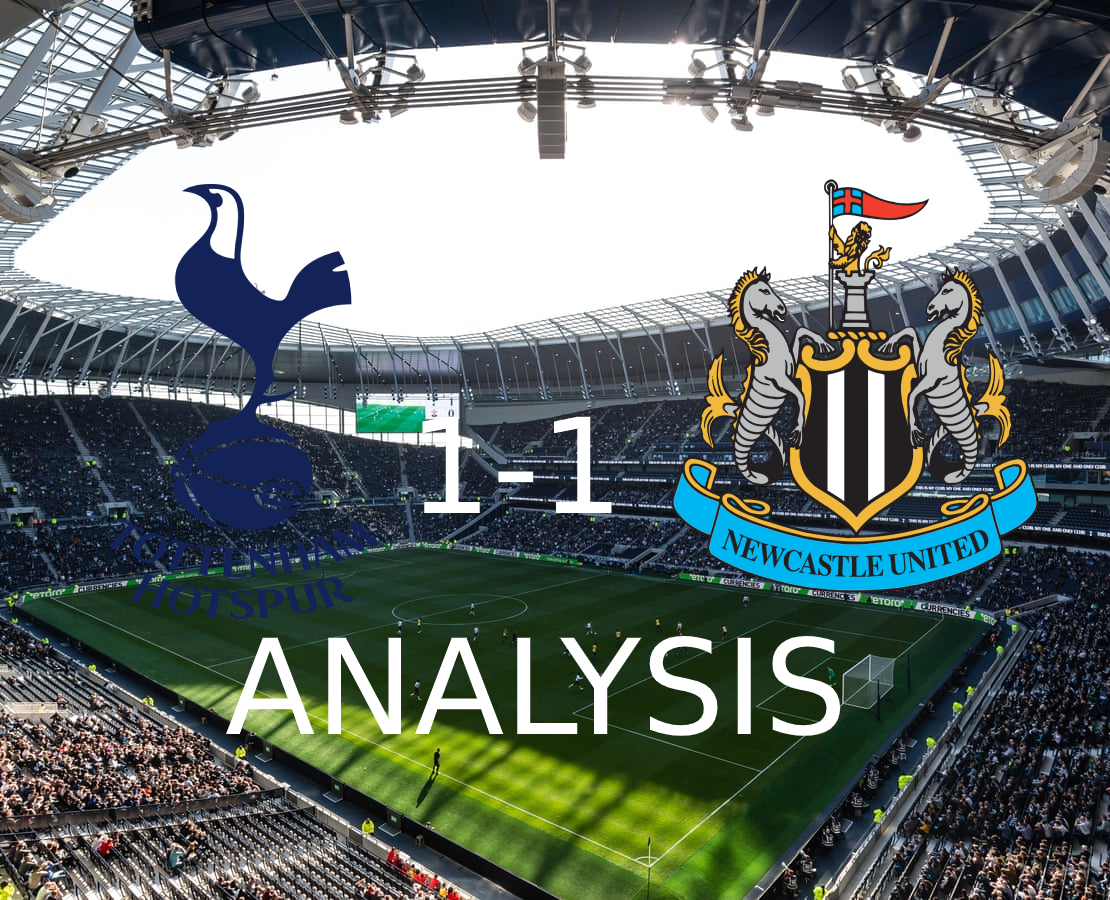 Newcastle manage to hold Tottenham to a draw.

After a disappointing home display in the opening fixture against Everton, Jose Mourinho was looking for his side to redeem themselves in their next home game. Despite being fully in control of the game, Tottenham failed to grab 3 points in the bag as the Magpies managed to score a penalty in the final minute to steal a point at Tottenham Hotspur Stadium.

Tottenham completely played Newcastle off the park in the first half, keeping more possession and creating more chances. They scored a well-deserved goal in the 25th minute as Harry Kane played a brilliant pass from the left side, which was put in the back of the net by Lucas Moura. Newcastle ended the first half without a shot on target. Tottenham continued to dominate in the second half but kept on failing to convert their chances, which were exactly what turned out to haunt them as Newcastle were awarded a very controversial penalty in the last minute. It was a handball and Eric Dier was the culprit. Callum Wilson managed to covert the penalty and level the score. The match went down to the wire and Tottenham were absolutely frustrated.

Jose Mourinho went with the 4-3-3 formation (which he changed to 4-2-3-1 in the game) on paper. He made one change as Giovani Lo Celso started instead of Tanguy Ndombele. His new signings, Sergio Reguilon and Gareth Bale, still didn’t feature, with the former being named among the substitutes and the latter being injured.

Steve Bruce played the 5-2-3 formation, with Isaac Hayden, Jamaal Lascelles and Federico Fernandez starting in a back 3, Javier Manquillo and Matt Ritchie featuring as the wingbacks and Joelinton, Miguel Almiron and Callum Wilson being deployed in a front 3.

Giovani Lo Celso, who started the game ahead of Tanguy Ndombele, was allowed creative freedom by Mourinho, as he switched him to a no. 10 role. Harry Winks and Pierre-Emile Hojbjerg continued to play in a midfield pivot.

The Argentinian midfielder had a brilliant game as he created many chances in the first half. He linked up very well with the likes of Son Heung Min and Harry Kane and didn’t hesitate to take risks whilst on the ball. Lo Celso was substituted in the 77th minute, ending his performance with a passing accuracy of 80% with 2 key passes.

Newcastle United spent most of the game behind the ball and were defending narrowly as well. This gave a lot of space to the Tottenham fullbacks, who tried to exploit the spaces left out in the wide areas.

Newcastle’s narrow defending is what eventually led them to concede a goal in the 25th minute.

As shown in the picture above, Hojbjerg played a great pass to Son. He ran with the ball to pass to Harry Kane. The red line indicates the position of the Newcastle back 5.

In the second picture, as Kane moved forward with the ball, he found Lucas Moura on the right side. He played a brilliant low cross to the Brazilian and he managed to put the ball in the back of the net.

With the first team goalkeeper, Martin Dubravka out injured, Steve Bruce had to count on their backup goalkeeper, Karl Darlow, in this game. The English goalkeeper must have received a pat on the back from his manager for his fantastic performance.

Darlow managed to make a grand total of 10 saves in the entire game. Some of the saves he made were top-notch, with a double-save from Lo Celso’s free-kick and Harry Kane’s shot on the follow-up being one of them. It’s probably safe to say that Karl Darlow was the best player on the pitch yesterday.

The Magpies were awarded a penalty in the 95th minute. VAR was consulted and the penalty was given despite the culprit, Eric Dier’s, back being turned and Andy Carroll’s header being from the close range. Newcastle scored the penalty, courtesy Callum Wilson, which made both the sides share points.

This incident was a major talking point of the match and generated a lot of controversy. The rules of handball received a massive criticism from many famous personalities.

“It’s an absolute disgrace. An absolute joke. Eric Dier jumps for the ball, has no control of where his arms are going to be, it was a header half a yard away from him, hits him on the back of his arm, he has no idea what’s going on. This is a joke. You’ve got more trouble on your hands Premier League, FIFA, UEFA, whoever is involved. Change this now!”

“I thought it last weekend with the Manchester United, the week before with the Leeds one at Anfield… it’s an absolute disgrace. I’m absolutely certain that rule is going to change in the next couple of weeks, in the sense of the interpretation of the rule. There’s no way players, managers, coaches are going to accept that. It is not right.”

Tottenham manager, Jose Mourinho, expressed his frustration in the post-match interview as well, whilst Steve Bruce admitted that the rule is a “total nonsense.”

It was, undoubtedly, a very unfair result for Tottenham Hotspur. They managed to dominate the entire game but all their hard work went down the drain with that penalty incident. One couldn’t help but feel sorry for Jose Mourinho for whatever happened yesterday.

Despite the disappointing draw, there are a few positives Tottenham can take from the game. The performance of the midfield and the work put on by the midfielders were a lot better in this game as compared to how they were against Everton.

The centre-back position still needs to be strengthened though. If they manage to land Milan Skriniar, it would be much better for them and they could easily give the likes of Arsenal, Manchester United and Chelsea a run for their money.